Read: NCAA DI women's basketball announces use of NET in 2020-21

What is the NCAA Evaluation Tool (NET) for women's basketball?

The NCAA Evaluation Tool (NET) for women's basketball is the contemporary sorting tool used to measure a team's quality and help evaluate team resumes for selection and seeding in the NCAA tournament. NET ranking is determined by who you played, where you played, how efficiently you played and the result of the game.

What components does the Women’s Basketball NET include?

What is meant by Adjusted Net Efficiency?

What is meant by Team Value Index?

Team Value Index is the results-oriented component of the NET, ranking more highly those teams that played and beat other good teams, factoring in opponent, location of the game and winner. 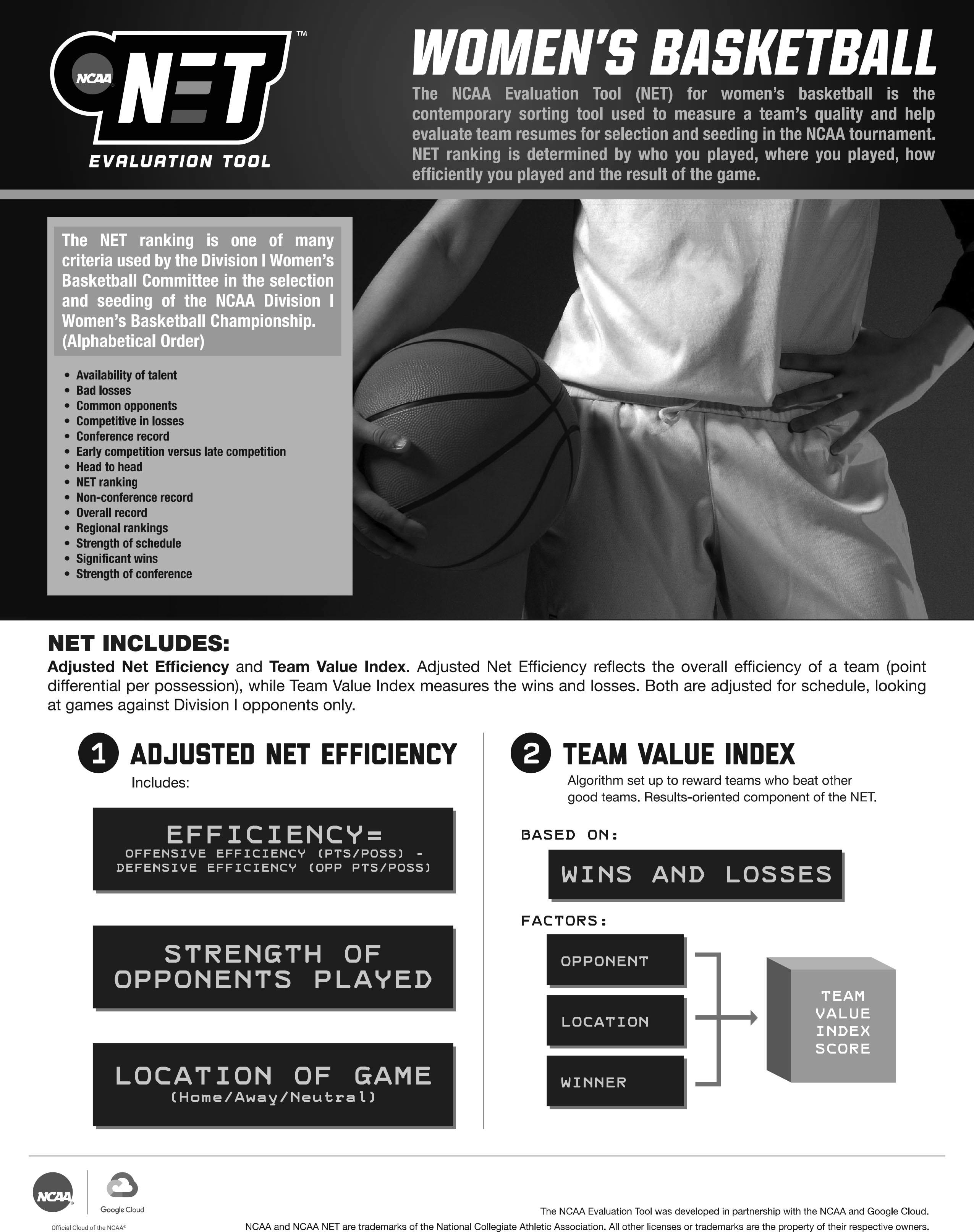 What does location of the game mean to a team's NET ranking?

In both Adjusted Net Efficiency and Team Value Index, the same performance against the same opponent will be valued more on the road than at a neutral site, and more at a neutral site than at home. The amount of this location adjustment is based on the data itself, as teams tend to generally perform worse on the road than neutral than at home, so adjusting for that allows for fairer comparisons than just using raw values.

What are the differences between the women's basketball NET and RPI?

The women's basketball NET is a contemporary sorting tool that more accurately measures the quality of a team determined by who you played, where you played, how efficiently you played and the result of the game.

The Ratings Percentage Index (RPI) was created in 1981 to provide supplemental data for the Division I Men’s Basketball Committee in its evaluation of teams for at-large selection and seeding of the championship bracket. The Division I Women's Basketball Committee began using the RPI in 1984. Simply stated, the RPI provided a ranking of each institution based on their Division I winning percentage and strength of schedule.

Will RPI be used alongside NET going forward?

Beginning in the 2020-21 season, the RPI will no longer be used by the Division I Women’s Basketball Committee.

How was the current women's basketball NET algorithm determined?

The Division I Women’s Basketball Committee decided to move from the RPI to the NET for the 2020-21 season after a lengthy evaluation process.

Included was a comprehensive assessment of the strengths and weaknesses of the men's basketball NET that has been used by the Division I Men’s Basketball Committee as a sorting tool since the 2018-19 season.

Following an analysis of women's basketball statistical data over a 10-year period by a team from Google Cloud Professional Services, the Division I Women’s Basketball Committee concluded that this algorithm was an optimal sorting tool and should be used beginning with the 2020-21 season.

Did the Division I Women’s Basketball Committee consider a phase-in approach given that many competition schedules are already set for the next two to three years for some teams?

The committee determined that there was no perfect time to implement the use of NET and that scheduling, whether with RPI or the NET, should be viewed similarly. Both metrics are used primarily as sorting tools, as tournament selection ultimately comes down to who you played, where you played and the result of the game. NET does a more precise job measuring opponent quality given performance than RPI does, so teams’ aim should be to play their best and not worry about ways to schedule to "game" the system.

During selection weekend, the committee members independently evaluate a vast pool of information. It is these subjective opinions, developed after watching hundreds of games, investing many hours of personal team (or game) observations, review and comparison of objective data, plus discussions with coaches and campus/conference representatives, that dictate how each committee member ultimately votes on the selection of the 32 at-large teams, seeding and bracketing of the teams that make up the 64 team championship bracket each year.

Will the NET rankings be made public? If yes, how often and where can they be found?

Like RPI rankings in the past, the NET rankings will be provided daily starting in early December 2020, continuing throughout the upcoming 2020-21 season.

Rankings will be posted on ncaa.com and ncaa.org.

How are the women's and men's basketball NET different?

While the systems share high-level goals and individual components, the NET algorithm used in each is different. The machine learning model developed for each sport utilizes only that sport's data. The women's model uses only women's game data, while the men's model only uses men's game data. The weights for each are trained using the historical data from the respective sports.

Why doesn't the NCAA release the formula/algorithm being used for the NET?

The NET ranking is derived from a more complex algorithm rather than a simple formula with relatively straightforward components like RPI (which is 0.25 * [Win Pct] + 0.5 * [Opp Win Pct] + 0.25 * [Opp Opp Win Pct]). Adjusted Net Efficiency and Team Value Index are calculated using machine learning models implemented over many of lines of code, with the calculations adjusting with new results each day in such a way that there is no static “formula” for them. For the more technically oriented, the schedule adjusting of net efficiency follows the procedure laid out in this Google Cloud NCAA Basketball Medium blog post from March 2019.

Now that we know that the women's basketball NET will be in place for the 2020-21 season, will the committee adjust the current algorithm going forward?

The NET model may be re-trained annually to include the latest season worth of data. As they have historically done with RPI, the Division I Women’s Basketball Committee will continue to conduct an annual assessment of the women's basketball NET and determine if the NET needs to be adjusted based on new data points in the game.

With the move to NET, will there be a change to the organization of the individual team sheets that are referenced by the Division I Women’s Basketball Committee during selections?

While no decisions in regard to organization of the team sheets have been made, the Division I Women’s Basketball Committee will discuss possible changes to the team sheets at their annual meeting this summer. Team sheet information will be communicated publicly once those decisions are made.

Will the Division I Women’s Basketball Committee or staff be available to provide more information on NET?

Members of the Division I Women’s Basketball Committee and/or NCAA staff are always available to answer questions or to provide advice on scheduling and other areas related to the NET. Those interested are invited to reach out to the NCAA women's basketball staff for more information.