"Well, if they decide to go to San Antone," Coach Blair replied. (Yes, he said San Antone rather than San Antonio.) "I'll vote for that because that's in the state of Texas and that's where our (2021) Final Four is supposed to be. There's a lot of facilities there; and, if you're limiting crowds anyway, they've got some very good high school programs as well.

"You've got Incarnate Word there. You've got UTSA which I used to play. Both of those schools are in the Southland Conference. Besides the Alamodome and where the Spurs play, there's so many different options. If it's going to make us safe and have an NCAA Tournament, let's do it. Heck, with the homecourt advantage, let's have the best basketball that we can possibly have. Let's get through COVID 2020 and 2021."

Championship playing dates and venues are still to be finalized, with the tournament expected to occur during the previously announced championship window in late March and early April. 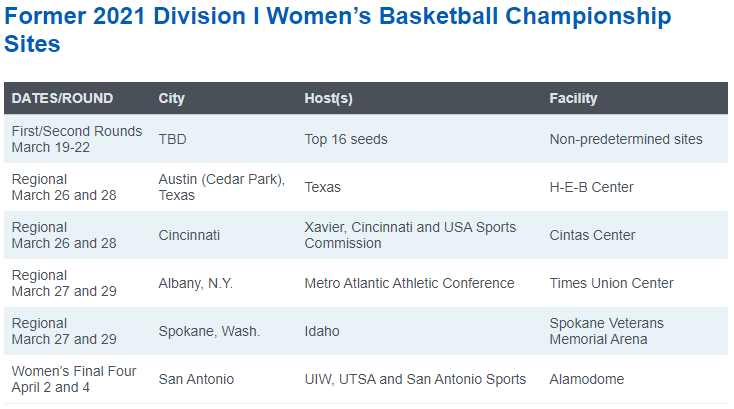 The committee emphasized the importance of conducting the championship in a manageable geographic area that limits travel and allows the NCAA to focus on the potential benefits of conducting certain safety measures in a controlled environment with competition and practice venues, medical resources and lodging for teams and officials all in close proximity.

"Conducting the championship in one geographic region allows for more planning and execution of safeguards that provide potential benefits for promoting the health and safety of student-athletes, the NCAA membership and all individuals involved in the championship," said Nina King, senior deputy athletics director and chief of staff at Duke, chair of the committee. "By making this difficult decision now, it allows for an earlier opportunity to work proactively with local public health officials within the host communities and ensures that the identified guidelines and protocols are considered for a more controlled environment.

"The committee and staff deeply appreciate the efforts of all the host institutions and conferences that were slated to host championship play in 2021, especially our predetermined regional hosts in Albany, Austin, Cincinnati and Spokane. We look forward to bringing the tournament back to the impacted sites in future years."

For the 19th consecutive year, an ESPN channel will broadcast all 63 games of the 2021 championship. This marks the 26th straight year (since 1996) ESPN is the championship's exclusive television home.

"San Antonio was the perfect region for us to explore because it already has an established and fully operational local organizing committee in place for the 2021 Women's Final Four," said Lynn Holzman, vice president of women's basketball at the NCAA. "We look forward to working with Bexar County, San Antonio and the state of Texas to further determine a path for creating a special championship experience for all 64 participating school while ensuring the safest possible environment for college athletes and officials."

"San Antonio is honored the NCAA is exploring our city to host its 2021 NCAA Women's Basketball Championship. We were already preparing to host a tremendous Women's Final Four; the opportunity to develop a plan for hosting all 64 teams is both exciting and a great opportunity for our local economy," said San Antonio Mayor Ron Nirenberg. "It is also a tremendous responsibility, and I know our local organizing committee and our hospitality industry will make the safety and wellbeing of the athletes, coaches and fans its highest priority."