Monday afternoon, the NCAA Division I Men's Basketball Committee announced that beginning with the 2020-21 season, the NCAA Evaluation Tool (NET) will be changed to increase accuracy and simplify it by reducing a five-component metric to just two. The remaining factors include the Team Value Index (TVI), which is a result-based feature that rewards teams for beating quality opponents, particularly away from home, as well as an adjusted net efficiency rating.

No longer will the NET use winning percentage, adjusted winning percentage and scoring margin. The change was made after the committee consulted with Google Cloud Professional Services, which worked with the NCAA to develop the original NET. 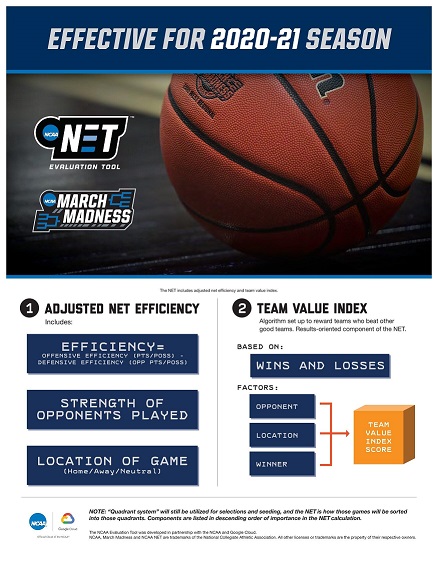 "When we adopted the NET in 2018, we had reviewed several seasons worth of data and we insisted that we would continue to evaluate the metric," said Dan Gavitt, the NCAA's senior vice president of basketball. "We've been very satisfied with its performance thus far, but it became evident after two seasons of use that this change would be an improvement. While we will continue to monitor the metric, I don't anticipate any additional adjustments for several years. We believe this change will result in more precision throughout the season and will be easier for our membership and the public to understand."

The men's and women's basketball NET rankings and team sheets will be provided publicly on a daily basis on NCAA.com and NCAA.org starting in December.